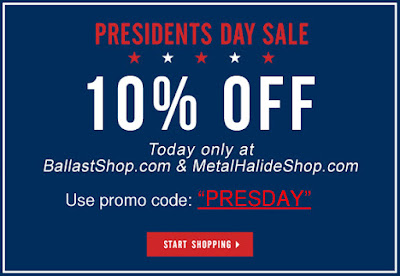 Posted by BallastShop at 11:10 AM No comments:

Spooky savings - get 10% off at BallastShop.com

No tricks, just treats! Today only get 10% off all products at BallastShop.com or MetalhalideShop.com using promo code "SPOOKY10" at checkout. 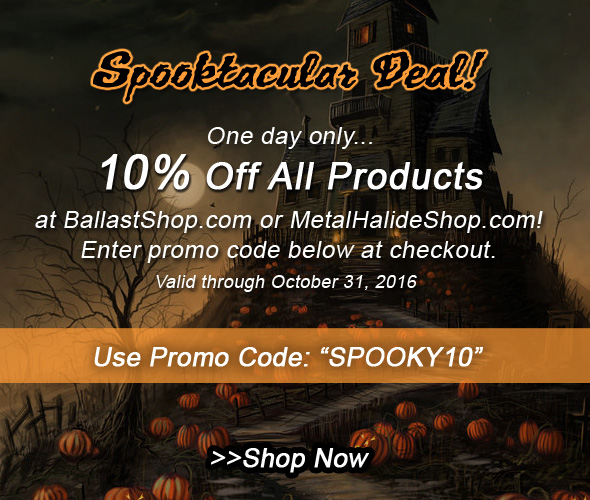 Posted by BallastShop at 10:45 AM No comments:

Click here to see all HyLite retrofit options and applications
Posted by BallastShop at 11:09 AM No comments:


In TRP’s TCM-ZB-D series, the wireless driver control modules are designed to work with LED lamps powered by TRP’s LED drivers. Featuring universal 100-277VAC input and 0-10V dimming, these control modules allow customers to use a remote to choose the type of lighting they want in their home. With Zigbee certification and a 5 year warranty, customers can buy TRP control modules with confidence in their energy conservation and lasting quality.


Thomas Research Products also announced their membership in the Zigbee Alliance--an organization whose mission is to develop and deliver the highest performing standards for wireless Internet of Things (IoT). Zigbee Home Automation is one of the certifications the Zigbee Alliance specifically awards to products that contribute to the energy management of homes.


For more details or to purchase TRP’s products, visit BallastShop online or call our customer service at 1-855-484-1145.
Posted by Unknown at 10:26 AM No comments:

A. LED Linear Tubes - Designed with an internal driver, ballast bypass LED bulbs eliminate the existing fluorescent ballast and operate on direct line voltage. During installation of the LEDs, minor rewiring is required to wire the socket directly into the fixture. Converting to ballast bypass LEDs permits you to sidestep the outdated linear fluorescent ballast and its limited lifespan, which avoids replacement and maintenance costs.

B. LED Fixture - If your fluorescent fixtures are outdated or in the wrong location, consider purchasing new fixtures with built-in LED strips. This option is slightly more expensive, but you have the freedom of choosing from a wide range of fixtures that will suit your needs and aesthetic preference. With a fixture that is designed specifically for LEDs, you will bring in the best long-term energy savings as well as improve the overall lighting in your facility while potentially decreasing the number of fixtures you need.

These two options come down to your personal desires for the lighting in your building. Both option A and option B will save you money and provide better quality light. If you have questions on which option is the best for you, contact BallastShop.com by emailing us at support@ballastshop.com or calling us at 1-855-484-1145.
Posted by Unknown at 11:18 AM No comments:


IOTA's ILB-CP LED Driver Series provides constant wattage delivery to the LED array for the full 90 minutes. Unlike traditional foot candles, there is no concern that the illumination will degrade at the end of the required runtime. Working at the system's voltage also enables the constant power drivers to avoid the varying output constant current emergency drivers provide. Within the ILB-CP Series, IOTA has released 120 minute emergency runtime drivers and created a slim profile subseries. The ILB-SL-CP subseries feature drivers with a narrower design allowing for easy installation within LED strip fixtures that may have limited compartment space.

Since hitting the market in late 2013, IOTA's ILB-CP Series remains the only emergency Class 2 LED driver that is UL classified for both factory and field installation. For more details or to purchase IOTA ILB-CP Constant Power Emergency LED Drivers, visit BallastShop online or call our customer service at 1-855-484-1145.
Posted by Unknown at 9:22 AM No comments:

Why You Should Convert Your Home to LED Lighting

LEDs have the power to potentially change the future of the lighting industry. LEDs in homes use at least 75% less energy and last 25 times longer than incandescent lights, decreasing not only the cost of electricity bills, but also the costs of replacement lights. “By 2027, widespread use of LEDs could save about 348 TWh [1 TWh = 1 billion kWh] (compared to no LED use) of electricity: This is the equivalent annual electrical output of 44 large electric power plants (1000 megawatts each), and a total savings of more than $30 billion at today's electricity prices” (US Department of Energy 2016).

When LEDs were first introduced to the lighting market in the early 2000s, most consumers were turned off by their high cost. However, the prices of LEDs have experienced a game-changing drop in recent years. Consumers can now find affordable LED bulbs at their local home improvement store.

If you converted your house to only LED lighting, your electricity bills would be cheaper, you would avoid replacement costs for about ten years and you would reduce heat production. If you switched just one 60 watt incandescent bulb to an equivalent 10 watt LED, your change in wattage would bring about $153.30 in savings each year. (Calculations based on operation for 12 hours a day, 5 days a week, at $.14/kWh)

While energy savings may be the driving factor of switching to LED lighting, LEDs have other great features such as limited heat production and lower UV emissions. Traditional incandescents and fluorescent bulbs release 80-90% of their energy as heat, but LEDs are designed to have cool surface temperatures, creating a more child-friendly home and lowering air conditioning costs. In addition, the low UV radiation of LEDs prevents attracting insects and damaging artwork over time.

Within the past two years, the number of Americans who have purchased LEDs for their home has doubled. While the rate of LED interest is growing, ⅓ of homeowners in the United States have still not purchased LEDs for their home (Tweed 2015). When your current light bulbs go out, we hope you’ll consider how LEDs can influence your home!
Posted by Unknown at 11:06 AM No comments: